August 04, 2019
Wow, July was such a great month. In some ways it went quickly and in other ways it seems to go on for a long time - I think that's what happens in the middle of summer! I had the first week of the month off work, and managed to do some crafting and exercise almost every day. The whole company was closed for the week which made all the difference - no email and no feeling of needing to jump in and just answer a few questions. This led to plenty of time at the start of the month to catch up on some projects and that carried through the month.

Let's start with stitching...I actually did some finishing! Hooray! My goal this year is to finish 2 pieces for every one I start and I spent much of the first half of the year working on UFOs, so it wasn't hard to keep to that goal...well, now that I have finished all but one of my UFOs (and I can't even find that one!), I am going to have to keep on it a little more. Here are the four pieces I finished this month - it was my first time framing and although I can certainly make some improvements, I am thrilled with how these little pieces turned out - each one is a 2x2" opening in the frame. 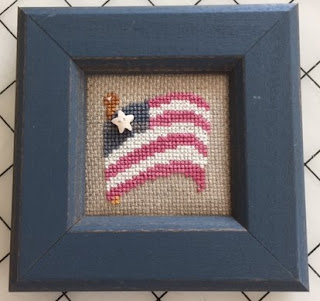 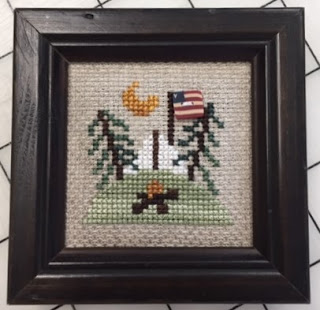 Then, I pulled out this pillow, which has only needed the bow attached for months, and added the bow. Thanks to Vonna's bow tutorial, I think it turned out pretty well. 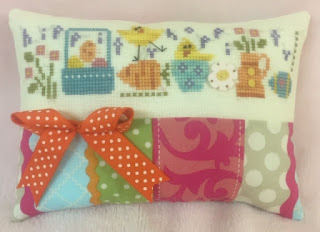 The last thing I finished are my two oldest unfinished projects as far as I can figure - I took some time at the turn of the year to put together a spreadsheet with all my projects and when and how I finished them - these were stitched in 2011 and 2012. I've done a lot between then and now so I still have lots of finishing to do to catch me up! I put these right up on the family room mantel when I finished them and I really like the bright pop of summery color. These are both Lizzie Kate boxer designs, and I saw yesterday that they are still available at House of Stitches (just in case you want to do some shopping!). These were finished into cubes, also a Vonna tutorial. I may still add some ribbon or embellishment to the top, but they are hanging out like this for now. 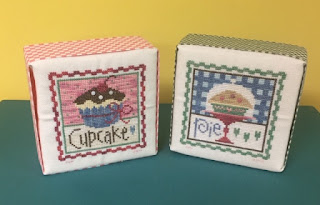 So, that was some good finishing progress, and I also made some great progress on finishing the stitching on four pieces! Three of the four are Lizzie Kate - my June and July monthly flip-its, and a cute ornament, and the fourth is my Bloom project, which I started before Stitch Maynia last year! I have worked on it on and off and am so glad to have it done. I took it with me yesterday and wasn't able to find a frame that really works well with it, so I will keep on trying until I find something. 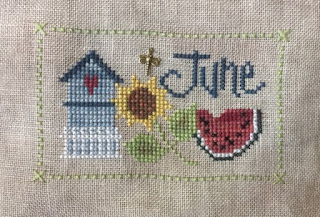 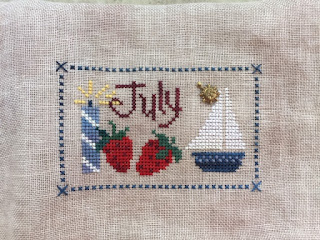 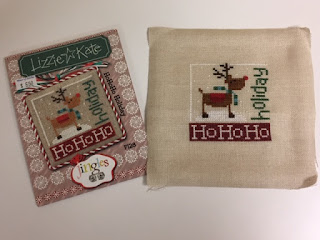 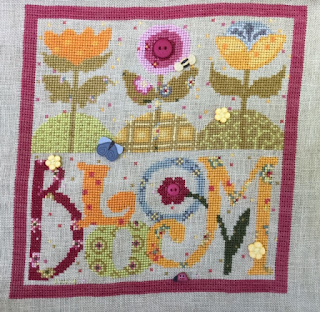 Whew, that's a lot of stitching - the kids and I have been working through the TV series Glee so I have had lots of couch time and I think I've made the best of it! The longer summer nights don't hurt either.

Next up, a little crochet. I finished the crochet work for this back in March-ish, but have dilly-dallied with getting it blocked and putting the buttons on - I spent an afternoon with my mom early in the month and was able to block it at her house and then finished it up a few weeks ago. You can see the pattern better while it was being blocked. I look forward to using this in the fall and winter. It is the Autumn Leaf Cowl and the best part is that I used stash yarn! 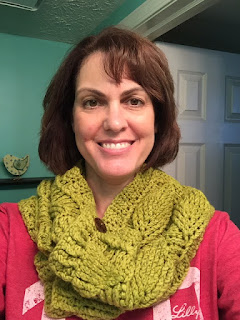 I also finished a crochet blanket square but forgot to get a picture of it - I am working on a second one now, so I will get them together when I finish that one.

On the quilting front there was one and only one goal at the start of the month - get my coworker's t-shirt quilt done! I made the back, quilted, and bound it and had it ready for her when we got back from our summer shutdown. Good news is that she loves it. :)  I put super soft fabric on the back and it is so cozy, so I hope she will enjoy it for many years. 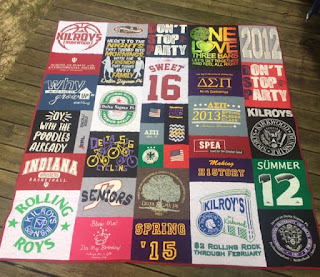 The next project on the quilting front was two selvage bags - I started to make one, but then stitched the selvage panel incorrectly, so wound up with two! The pattern is from the book Everyday Handmade, and I found it pretty fun to make, although the prep work for the selvages is pretty involved. In the end, I think they are really cute and now I am looking for a good way to use them. 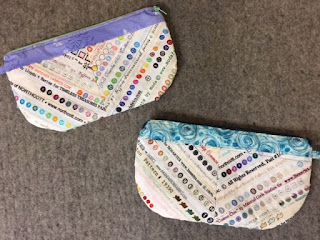 Last up in my quilting projects is my Santorini Houses quilt. This was a pattern from the Moda Bake Shop and I made it several years ago. I have known for at least two years how I wanted to quilt it, but I was chicken...so I put on my big girl panties and got it loaded and quilted. If you click on the picture, you can see a few more details, but I will try to show more when it is fully finished. I quilted the name of each street I've lived on under each set of houses and then stitched trees, bushes, and flowers in between. I am really pleased with how it turned out and now am on the hunt for a good binding. My plan is to have it done in August so that it is ready to bring to my fall retreat for show and tell. 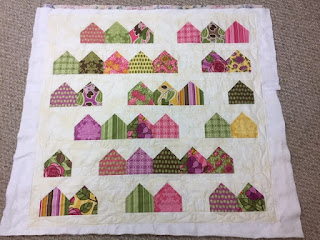 Net fabric used: 27 5/8 yards
Linking up with Donna at quiltpaintcreate
-------------
15 Minutes a Day: The best month so far!
I stitched, quilted, or crocheted for at least 15 minutes 28 out of 31 days in July, for a 90% success rate.
Linking up with Kate at Life in Pieces
accomplishments crochet cross-stitch HQ Avante quilting stash report ufo

Susan said…
Wow. Your success rate in ALL areas shows how much time you spent. Congratulations on all your stats and finishes, and the advances you made on your works in progress.
8/4/19, 7:09 PM

Kate said…
Wow! You had an excellent July! Congrats on all the stitching time, de-stashing and stitching. Hopefully August will be at least as good. Happy stitching!
8/5/19, 7:20 AM

Robin in Virginia said…
Jennifer, you had an incredible month of July. Way to go! Where did you find those small wooden frames for your SamSarah stitches? Have a fabulous August!
8/5/19, 9:05 AM

Carol said…
Wow! You had SUCH a productive July, Jennifer! Your finishes are all so sweet and I love the teeny-tiny framed pieces. Glee is certainly a fun program to keep you entertained while you stitch (although those last couple seasons just got plain weird and a bit offensive in my opinion :) Do your kids do any crafting while watching TV with you?

Your leaf cowl is lovely and I'm sure you'll get a lot of use out of it this fall. And great job on the T-shirt quilt top for your coworker. I had tossed around the idea of making one for one of my sons years ago, but abandoned it and gave the shirts to Goodwill :) The little house quilt is darling as well. Whew--I'm tired just reading about all you did. Hope August proves to be just as productive!
8/12/19, 8:19 PM 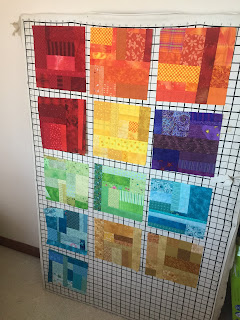 It's been quite a while since I shared a Design Wall Monday post, but with the holiday today, I had a chance to finish up a quilt top and thought it would be fun to share. I started this project last year as part of the Rainbow Scrap Challenge hosted by Angela at SoScrappy . It seems like I can pull out a quilt for this challenge about every two years instead of every year!  My son asked me for a new quilt for his bed, as he keeps growing taller and taller! We looked at a few patterns and  selected End of the Rainbow, the cover quilt from Irish Chain Quilts by Melissa Corry . I've loved this quilt since I bought the book, so I was glad to finally make it.  The blocks start like this - lots of scrappy sewing to put together a 9" square. Then you cut that up and attach it to the background fabric. They make for great leader/ender blocks.  Scrap blocks from several weeks We decided to do dark backgrounds instead of lights, so I dug through my stash to find all the medium/d 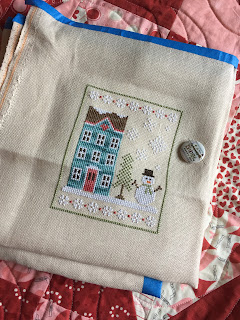 A great weekend for Cross-stitch

I did a lot of stitching in January - between stay-at-home and colder weather, I had lots of time to dedicate to needle and thread. As luck would have it, I finished 3 of the 4 pieces I worked on during the month in the same weekend! In fairness, I was pretty close on the first two before the weekend, so it wasn't that much of a stretch.  The first finish is a project that I selected to be my 2021 series piece. I picked up all five pieces of the Little House Needleworks pattern Snow Place a few years ago and always planned to stitch them in one piece. I dug through the stash over the holidays and found a piece of linen that would work. I got started on it Jan 2 and was missing one thread color (Ladybug). I stitched as far as I could and didn't think I would get the thread for a January finish, but it arrived late in the month and I finished it right up. I love the first "block" and look forward to getting start on the next one. This looks to be stitched on a piece of 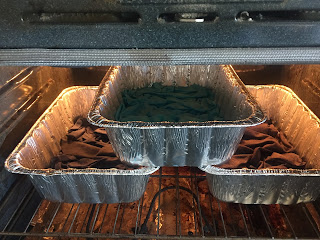 November 2020 Stats, Something new and Something old

With a little over a week off work at the end of November, I was able to get into my sewing room (and my mom's) and get quite a bit accomplished. I had progress across stitching, crochet, and quilting.  Let's start with the stitching and with the "something new." My mom and I decided to try our hand at fabric dyeing after watching a fair amount of flosstube (youtube videos about cross-stitch) and jumped in with some aluminum tins and three different RIT dyes. It was much easier than we expected to mix the dye, prep the fabric and get it into the oven. Once it came out, we rinsed and rinsed and rinsed and I think we got most of the dye out! We laid them all out across the kitchen table to dry and I kept walking by to sneak a peek because they were so pretty. I grabbed a bunch of scraps or older fabric from my stash so I had lots to dye. My mom cut apart some Monaco that she'd picked up and cut it into a few pieces to dye. We used the tutorial from Priscilla and Che